You are here: Home / Drawing / How To Sharpen Colored Pencils Without Breaking The Lead 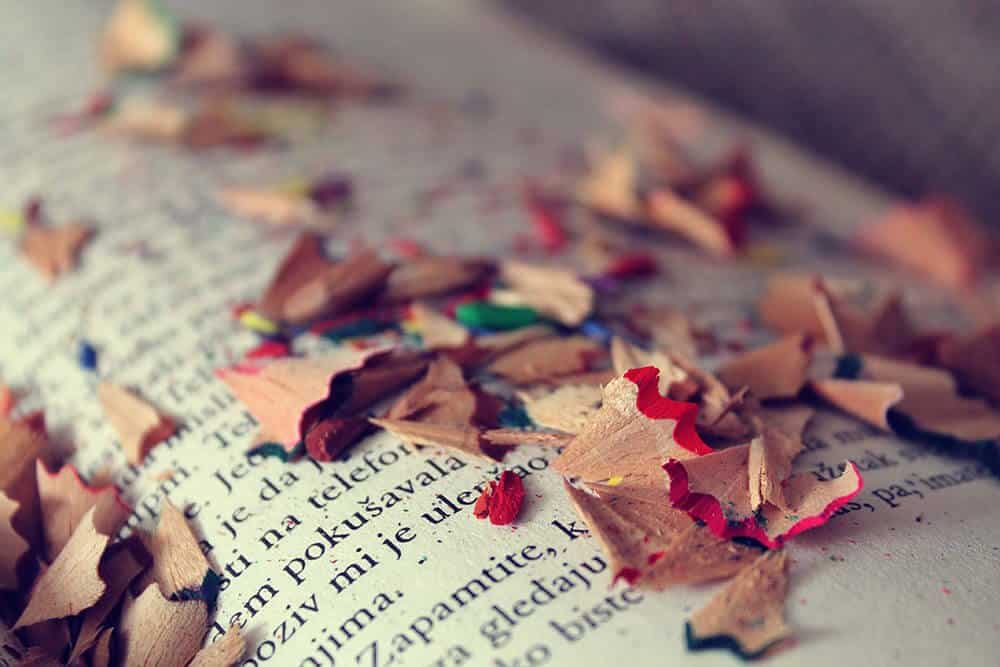 I still remember the first time I took my beloved colored pencils to the sharpener.

I had a cheap, plastic, cylindrical shaped sharpener that I bought during my Freshman year of college while experimenting in several different art classes for the semester.

It was late one night, bleary eyed, when I noticed that the lines I was drawing with my freshly unwrapped colored pencils started to look messy. After a brief inspection of the tip, I realized that the point had soften significantly, thanks in part to the wax base that these pencils rely on.

So needless to say, I went ahead and took the colored pencil and gave it a few turns in my trusty sharpener to get the point looking sharp…

The point on the tip of the colored pencil seemed to break clean off.

At first I didn’t think much of it, perhaps just a snag on the sharpener.

So, I give it a few more turns…

Then again, it happened…

I pull out the pencil and realized that the point broke again!

It’s at this point (pun intended) I start to wonder what is going on, is it a problem with the pencil? I mean the sharpener had worked on my standard #2 pencil that I had lying around.

So… with great hesitation I give it one more try…

AGAIN! The wax core of the pencil is snapping clean off.

Why were my beautiful, and now mangled, colored pencils not forming a sharp point when going through my sharpener. After all, it is a standard pencil sharpener right?!

When it comes to colored pencils, it’s critical that you know how to sharpen them properly.

To Know How To Sharpen Colored Pencils, You Need To Know Them From The Inside Out

Colored pencils, by their very design are starkly different from your standard lead pencil that you are likely already familiar with.

Typically relying on either a pigment infused wax or oil core, they are much more softer than a lead pencil.

Therefore, to care for them properly and get the longest lifespan from your pack (after all, some colored pencils aren’t cheap), you need to know how to sharpen them properly.

I know it seems funny from the onset, but colored pencils do need to be cared for a bit more than your standard pencil due to their structural difference.

A Different Point When It Comes To Colored Pencils

Sure, when doing detail work with colored pencils, the sharper the point the better.

However, the problem in my scenario above was based solely around the sharpener.

When selecting a sharpener for your colored pencils, you want to make sure that you get one that has a quality metal blade that does the sharpening.

You see, the problem when you rely on your typical dollar store-esq sharpener is that it…well…doesn’t actually sharpen all that good.

When the sharpener doesn’t have a sharp and thin blade, it somewhat grinds away at the wood until it meets the inner core of your pencil.

Think of it like using a butter knife when making thin slices of a tomato – it just doesn’t work no matter how careful you are!

Therefore, given the inheritably softer core of colored pencils, they just simply can’t withstand the onslaught of a dull sharpener…

But that’s not all:

If you rubbed the tip of your color pencil down to a nub, you will also want to get a pencil sharpener that has two settings – one for a wider set head and one that creates more of a sharper edge (akin to the pencil sharpeners you may use for a traditional pencil).

This not only makes it easy on the wood around the core itself, but by the time the blade of the sharpener gets to the core of your colored pencil, it won’t exert nearly as much force – leading to a lower susceptibility to breakage.

What If The Wax Or Oil Core Of The Colored Pencil IS Broken?

Some colored pencils from the manufacturers can just be really poor quality.

Well, sometimes during the production process the core of the pencil may be completely broken when it was set into the wood itself.

Therefore, no matter how fancy your pencil sharpener may be, the core just keeps coming out broken up.

But check this out:

One of my art class friends told me this trick that they do in order to get their colored pencils in tip-top shape.

They said that they put their pencil in the microwave for 10 seconds.

My jaw hit the floor.

I had so many questions!

Who in the world microwaves pencils…

But after my gut reaction of disbelief started to subside, they explained to me that when you heat up the pencil, the core will melt (remember it’s made of wax or oil) and will ‘reset’ so to speak into one long piece again.

I don’t know if they are a genius or crazy (that’s another article for another day), but guess what:

But, if you want to play it safe (sans microwave), you can just simply put the colored pencils in a sunny spot to help soften and melt the cores together. In fact, it’s even a recommended fix on the Prismacolor FAQ section on their website.

While they don’t advise microwaving your beloved colored pencils, I would venture to say they had to disclose this for legal reasons.

But hey, I am not a lawyer!

Options Many Artists May Consider To Sharpen Their Colored Pencils, But Probably Shouldn’t

Ok, ok, so I am guessing you came here to figure out how to sharpen up those colored pencils you own.

So far, the one method we talked about was the trusty double-barrel sharpener.

But what about an electric sharpener, sandpaper block, or your trusty pocket knife?

Well here is the scoop on all of those:

In short, these sharpeners are probably some of the worst to use on your favorite colored pencils…

Electric pencil sharpeners are like a vicious meat grinder that provides absolutely zero control over the sharpening process.

When you simply slide your colored pencil into the electric sharpener, you are at the will of this machine to get the job done.

But what’s more is that electric pencil sharpeners are designed for lead pencils, not colored pencils.

In fact, if you look at the manual of electric pencil sharpeners many manufactures advise you to NOT use colored pencils with the sharpener.

The reason is largely due to the soft core of the colored pencil when compared to your standard lead pencil.

While very similar in nature to your standard colored pencil sharpener that we talked about above, cosmetic sharpeners are best used for cosmetic uses only – for two reasons:

Now if you are in a pinch and you absolutely need to sharpen your colored pencil, a cosmetic sharpener can work.

Just be sure you fully clean it out post-use so you don’t have any unexpected problems the next time you go to apply your favorite eye liner.

Sandpaper blocks are a perfect tool for artists out there that love to have full and complete control over the entire creation process.

With a sandpaper block, you can sand down the wooden barrel of the pencil to your exact preference.

Now the learning curve with this tool may be a bit steeper than your standard sharpener as many beginners do often struggle to get a sharp point when starting out, but a little due diligence should get you there – remember, practice makes perfect.

But as great the control that a sandpaper block may have, there is a catch:

With no reservoir to collect the colored pencil dust, you will definitely want to make sure you either sand your colored pencil either outdoors or over a paper towel for a simpler cleanup process.

Sandpaper blocks are also great to use on pastels, charcoals, pencils and other artist mediums.

Like the sandpaper block above, a standard pocket knife can be used to get a sharp point on your colored pencils.

However, unlike the sandpaper block, you have very little in the way of control when it comes to excess waste.

Given the amount of pressure you need to apply in order to attain a sharp tip, many artists who use a pocket knife on their colored pencils may either have too shallow or too aggressive of a cut which may lead to some waste of the core of the pencil itself.

A pocket knife is great for in a pinch, but if you need to sharpen up a set of 30 colored pencils, this will be a tool of last resort.

More Than One Way To Sharpen A Colored Pencil

As you learned in the article above, there is more than one way you can sharpen a pencil.

However, if you are looking for the easiest and most reliable way, then we would strongly recommend that you go with a double barrel pencil sharpener that has been designed for the naturally softer cores found in colored pencils.

While the other tools may work, they all have their own specific downfalls.

For artists both seasoned and novice, a quality colored pencil sharpener can let you concentrate on your work rather than the ancillary details.

Great artists are always learning. Sharpen your skills by being a part of our email list.